Why overlooking one button in your DAW can ruin your mix

There are countless mistakes that will cause you to ruin your mix. However, the correct mindset and one button in your DAW will help you to stop these problems before they take a stranglehold over your mix. Before I get to that though, I want to share a story of how I learned this the hard way.

In 2015, I was lucky enough to spend a few weeks watching and learning from one of my mixing idols. Alan Moulder has mixed some of my favourite records from the likes of Foo Fighters, Smashing Pumpkins, The Killers and Queens of the Stone Age. In some ways, it was a frustrating experience because he wasn't doing anything that I wasn't already doing but his mixes were substantially better than my own. He was also incredibly consistent.

You might be quick to point out that the source material was stellar before mixing began and that would certainly be the case the majority of the time. However, one of the projects he worked on during my time there was a well-known band that had self-recorded an album. The tracking was good but it wasn't world-class but the mix afterwards was still epic!

My head was spinning, he seemed to be doing the same types of processing that I would have. He was certainly identifying the same issues I was hearing. There didn't seem an obvious answer to why his mixes crushed mine. I could have written it off as just experience, but I knew at the root of it must be something tangible.

After a few more days, it suddenly hit me. Every couple of minutes he was bypassing things, whether that was plug-in settings, desk EQs or muting parallels. He was auditioning the results of his processing before and after. Now, you might be thinking "well, d'uh I do that", but it was the way that he did this systematically that was the interesting part.

The bypass button in your DAW can become your best friend because it allows you to take time to reflect on your progress and correct your course BEFORE you go completely off-piste.

A successful mix is not built on one great decision or one magic plug-in or technique, it is a series of hundreds of small, methodical steps which results in something cohesive. Every action has a consequence, not just in the instrument you are working on but the perception of everything else.  Alan took a little bit of time regularly to analyze this balance. I, on the other hand, was too focused on the minutia and not on the bigger picture. I was too "zoomed in" the whole time and my mixes suffered because of it.

Taking the time to bypass and "zooming out" is critical to making records not just sound good but feel good.

When zooming out I like to toggle quickly between the processing on and in bypass, whilst doing this I ask myself two questions:

Have I made the instrument I am working on SOUND better?
Have I made anything else FEEL worse?

If the answer is yes to the first question and no to the second you can move on.

The final option of yes to both questions means that you have a decision to make. You can either roll back the processing you have done a little bit, to a point of compromise or you can process the instrument which feels worse to bring it back into balance. These decisions are the crux of mixing and the subtle art of mixing is how you are slowly massaging elements into place.

If you approach mixing in a linear fashion (starting with the kick drum in isolation and then the snare etc) you more-often-than-not end up with a mess. Sometimes it might seem like the mixer is moving haphazardly between instruments but they are responding to the needs of the music.

I teach my students to remember the acronym LAPB, It's ingrained in my mind as the phrase "Let's All Process Better". Here is a flowchart breakdown of the process: 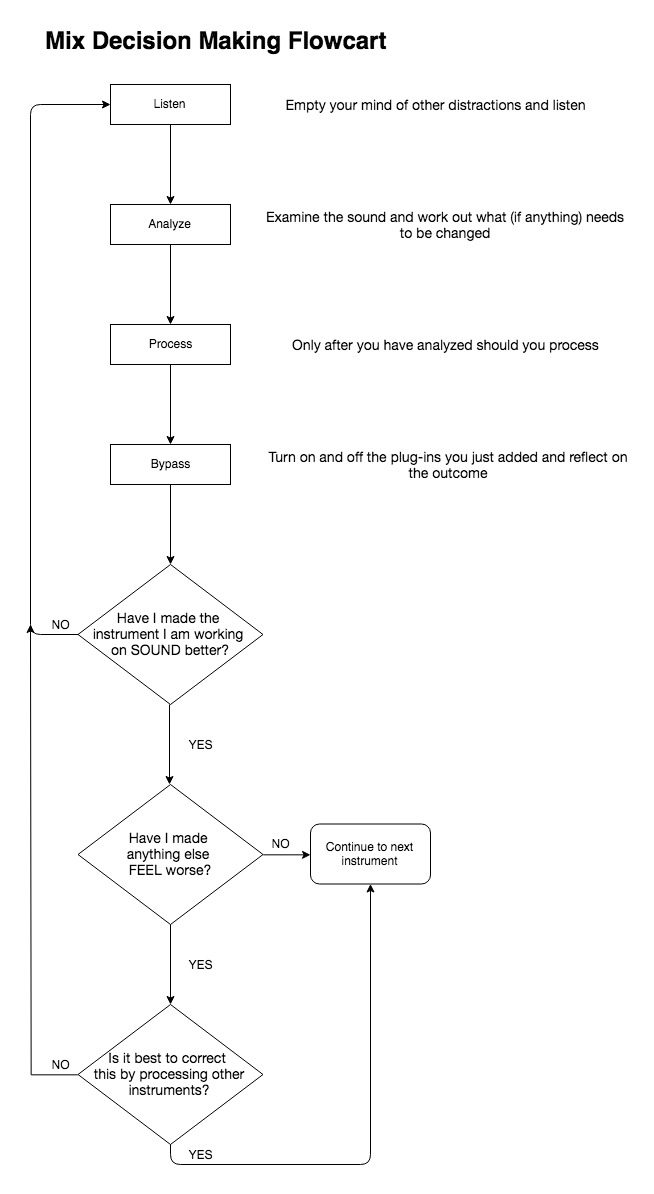